So you think fish can’t speak? 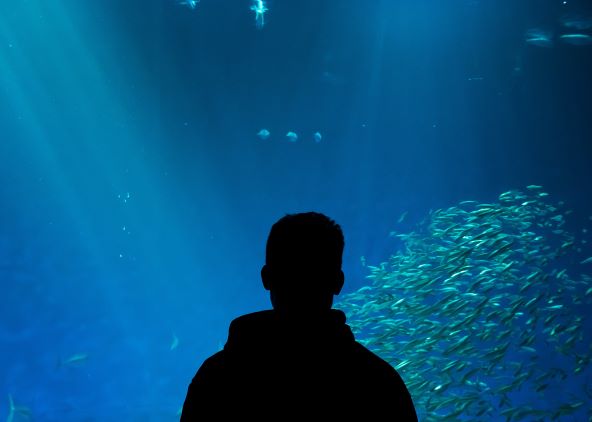 You gawp at them through the windows in the aquarium, you see them as you dive into their waters, you watch them from the pier as they swim beneath you, and you wonder; what would it feel like to communicate with fish?

If you could communicate with salmon, for instance, you’d discover that they love fresh air bubbles that make their water resemble your jacuzzi. You’d learn about how some seasons make fish go crazy, with behavior that somehow resembles how people let their hair down and go wild in the spring sunshine. You’ll find out that some of them seem to be afraid of deep and dark waters, especially when they are very young, just like your own children are.

Learn to speak ‘Fish’
For the most part, salmon come across as somewhat withdrawn, or at least difficult to understand. However, if you were to get to know them, you’d discover that they too have personalities. There are adventurous fish who love to explore. Some are dominant and aggressive bullies who attack their fellow fish. Others are relaxed and prefer quiet lives.
Salmon might be shy as individuals, but as soon as they’re in a crowd, sometimes described as a school, their chatter is incessant. A school of fish is forever sending signals; as baffling as flirtatious looks between people, as hard to interpret as a human stare.

Communicative fish
Salmon respond to external signals. They react when they see color and light or when they hear sounds. They change their behavior in response to the availability of food, to the movement of the water, and to fluctuating temperatures.

Animal behavior
Man has always known that an animal’s behavior can be read and interpreted. As a science, animal behavior is well established. Much research has gone into understanding our pets, farm animals, and animals in the wild. Relatively speaking, the science of fish behavior is far less developed, but we already know a great deal more now than we did just a couple of decades ago.

Fishermen have always sought to read the behavior of fish in the wild, in order to predict their next move. Once they knew what the fish found attractive, they’d know how to hook them. If they knew where the fish swam, they could catch them in nets. Over the centuries, this knowledge has proven invaluable to fishermen, whether they do it for sport or for a living, but it’s not an exact science.

The aquaculture industry also knows a lot about the fish they farm. Salmon behavior, in particular, has been one of the focus areas of research in the aquaculture sector. However, it is only recently that they discovered how to speak ‘Fish’. This is how they do it.

Observing behavior
It all starts with observations, though watching fish underwater is obviously much more difficult than observing the animals that walk among us. Salmon farmers used to do this by watching them from above, though over time they have come to rely on increasingly sophisticated technologies such as acoustic sensors or underwater cameras with special lights.

The sensors and cameras observe every move within a salmon pen, 24 hours a day, seven days a week, 12 months of the year. The observations are registered as data, which is fed into computers that use software to analyze the behavior of the fish. The software looks for behavioral patterns. Aided by machine learning, it identifies causal relationships, or cause and effect, in order to help us understand what’s actually going on down in the deep.

Health and welfare
The insight provided by the sensors and the software is obviously combined with the expertise and experience of both farmers and scientists, as well as with data about the weather, tide, and environment such as temperature.

When combined, we are able to understand when the fish tell us that they are hungry, which means we can feed on demand. The fish will also tell us when they are full, so we avoid the risk of feeding them too much.

This is beneficial for a number of reasons. It helps reduce feed waste, which means farmers spend less money on feed. In turn, it also reduces the drain on any resources used to produce the feed.

The amount of feed ending up on the sea bed is also reduced and farmers benefit from increased feeding efficiency and consistent, low production costs.

In the future, the monitoring technology will also help farmers spot problems early such as disease or lice infestations, which means they will be able to respond quickly. Similarly, the technology will help them keep an eye on the state of the cages and other equipment that can be damaged by the powerful sea, which means they can repair any damage before the fish escapes.

When they speak ‘Fish’, they can listen to them before they respond by designing better cages, in parts of the sea where the tide, the currents and the temperature are optimal.

Universally beneficial
Humans learning to speak ‘Fish’ obviously benefits fish in cages, as well as wild fish and nature more broadly. However, it doesn’t end there.

Fish farmers benefit as well, and not only because their feed costs decrease. Humans learn from computer observations, and with machine learning, we are seeing ever more processes becoming automated, even autonomous. This frees up farmers’ time, so they can concentrate on solving other challenges aquaculture is faced with.

Efficient operations benefit consumers as well, as it makes it easier to farm fish and sell them at affordable prices. It becomes easier to increase the scale of operations too, without sacrificing environmental considerations.

Consequently, the aquaculture industry offers hope that we will still be able to provide protein in a sustainable manner when the world’s population has reached 8 billion people, which is what the United Nations expect to happen by 2050.

These are the reasons why learning to speak ‘Fish’ will help feed the world, which to me seems like a pretty good reason to do it.